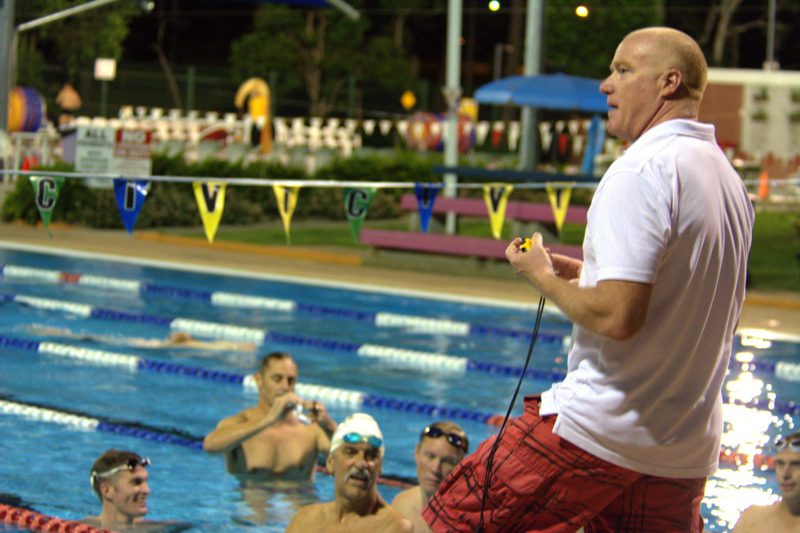 At any one time he is helping hundreds of athletes – of all ability ranges – achieve their personal goals.

He trains world champions, national champions and has helped countless novices prepare for their very first event.
Trent has a unique ability to tap into the things that drive individuals and use them to motivate commitment, effort and performance.

In this episode of the Team Guru Podcast we talk about Trent’s philosophy on coaching.

He tells us about the lessons he learned from his time coaching elite swimmers and his transition to age group triathletes.

He steps us through a week in the gruelling life of triathlon training.

And he tells us about that moment he realised he was no longer just a coach – but a small businessman too.

In his first coaching job, as Rick Van Der Zant’s assistant at Yeronga Park, Trent learned that a squad must be inclusive – that athletes of all levels should have as much contact with each other as possible

When Trent started coaching, his main motivation was to maximise individual potential. This motivation has been consistent from his early career experiences coaching elite swimmers to his current role as head of Red Dog Triathlon Training where he predominantly coaches age group (adult) triathletes

Trent was a coach for the Paralympic swim team during the Sydney 2000 games. That experience had a huge impact on his outlook as a coach. He realised that there was much more to be achieved as a coach than working with elite level athletes

For young swimmers, who train up to 11 times per week, the commitment required by the whole family is phenomenal – time, energy and money. Trent realised as a young coach it was very important to be aware and learn to manage parent expectations

Trent is known as a master motivator

He understands that everyone that comes to his squad is driven by different goals – completing their first triathlon, winning their age group, turning professional, looking good for a wedding or getting ready to have a baby

With over 300 athletes in his charge, Trent has learned that some requests that come his way may seem fair and reasonable, but would become impractical and impossible if each member of his squad were to make the same request. Trent sees his challenge as managing this concept while continuing to treat each of his athletes as individuals

For Trent, coaching consists of art and science. Science dictates the way sessions and training programs are structured, but he has a firm belief that his skills lie within the art of coaching – the way he interacts with his athletes as people

Trent began coaching triathlon at the perfect time. Triathlon is growing rapidly as a sport. Between 2010 & 2015 national annual membership has more than doubled (9,744 – 21,445)

Culture is Key – RTT started small, with a strong culture of 15 committed athletes. The business has grown from this humble beginning by attracting like-minded athletes, who share similar goals and work ethic.

‘We like to work hard and play hard, that’s our culture’

Fostering this culture, and the growth in Triathlon as a sport, has seen a 1900% increase in business over a 7 year period

During this growth, Trent came to a point where he realised he couldn’t continue to do everything himself. He realised that his real value was in coaching, not in business administration. He outsourced those responsibilities so he could concentrate his efforts where his athletes needed them most

RTT has extended to Red Dog Pups – a squad for kids. Trent sees this as a natural step for his business. Many of the members of the squad have had their own kids and are interested in given them an opportunity to participate in a sport that they enjoyed

Trent plans to continue coaching right through his career – getting up at 5.00 each morning to run a track session or get on the bike is something he really enjoys:

He also says he plans to grow old with his squad.

A Week in the Life

‘Above all else I try to provide a safe and social environment for every ride.’

RTT athletes compete in just about every triathlon across the country – large and small. At the biggest events in Australia, the Noosa and Mooloolaba Triathlons, the Red Dog kit is impossible to miss

‘Training in a group provides so many benefits for individuals’

Currently the squad is targeting the Port Macquarie 70.3 and Ironman event on 1 May. There are a lot of people in the squad who will be completing their first Ironman distance

Preparing for an Ironman distance triathlon is a huge commitment for athletes. They train between 12 and 20 hours of training per week over a 3-month period.